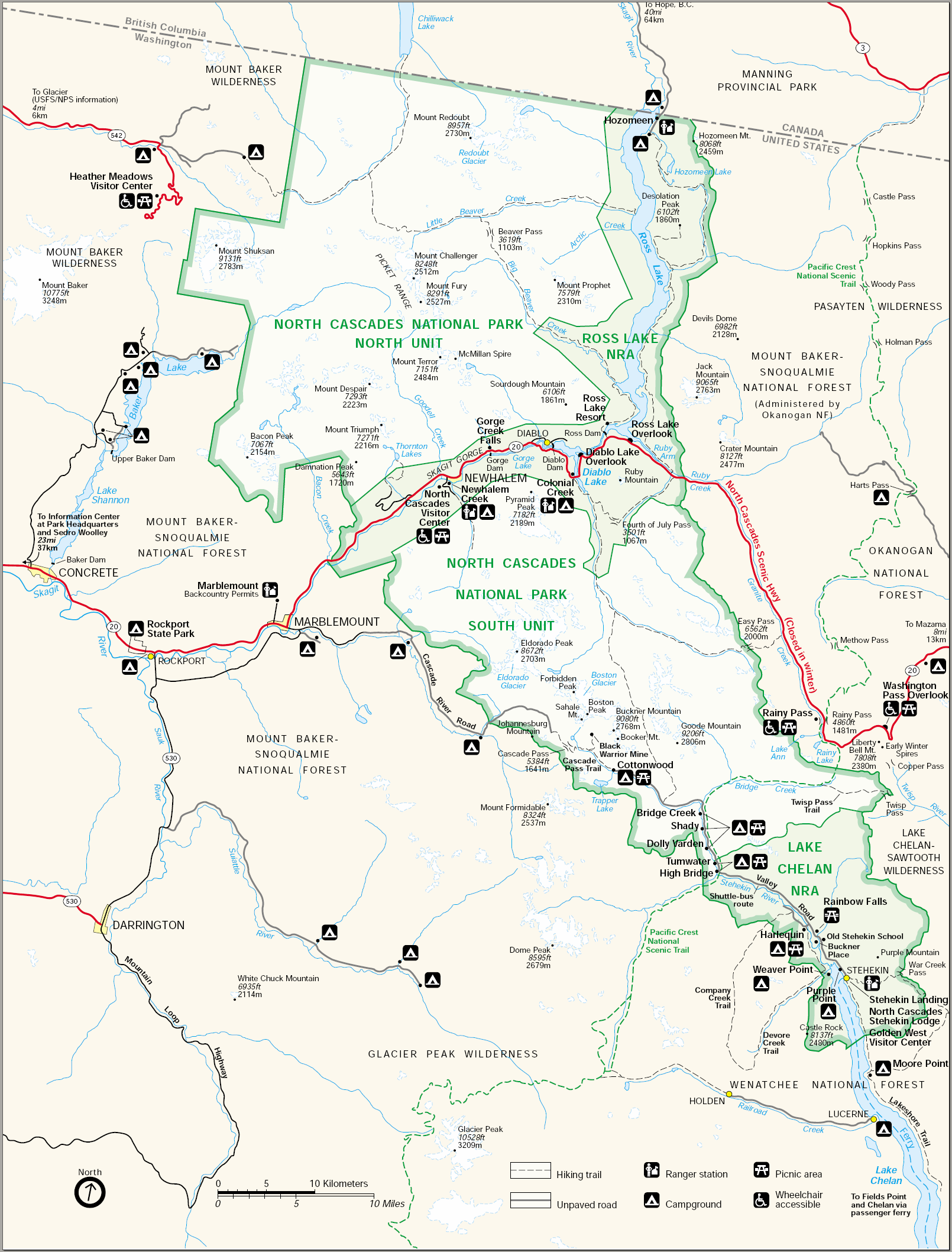 I was completely oblivious of our nearest national park until only a couple years ago. Now that I’ve had the chance to explore it, I consider it one of my favourite parks, and one of the best places to venture for a weekend of hiking.

The park is located about an hour off of the I-5 corridor in Northern Washington and about two hours north-east of Seattle. It manages to remain a rather quiet park, with many Seattleites electing to go to Mt. Rainier or stay even closer and explore the Snoqualmie Pass area. The main highway through the park, State Route 20, is closed in the winter beyond Ross Lake, due to the high amounts of snow the park receives. The road usually closes late in November and reopens in May thanks to the hard working snow-removal crews of WSDOT.

As with many of the National Parks, North Cascades was recognized first as a key location for resource extraction. Turn-of-the-century miners built many of the original roads and trails into the park and some active mines even existed in the park after it was officially protected. Thankfully the park escaped much of the logging that was rampant through the Pacific Northwest.

Diablo Lake under a gloomy sky

One industry still remains in the park: hydroelectricity. There are three dams that were built along the Skagit River that provide about 20 percent of Seattle’s electricity. The Seattle City Light company has an info display inside the turbine station of Gorge Dam in Marblemount. There is also a nice waterfall and garden display behind the turbine station that is worth a short visit. The other two dams, Diablo and Ross, created large lakes that have become a focal point of the park, pulling in many boaters through the summer months. ​

Since discovering the park, I have had the chance to visit on a number of occasions and for a number of purposes. Earlier this year we ventured into the park as part of our training program as we were preparing for the John Muir Trail. In May we tackled the challenging hike to Cow Heaven, and we took advantage of a long weekend to backpack along Ross Lake.

May backpacking trip along the shores of Ross Lake

In 2015 we enjoyed a long weekend trip camping at Colonial Creek Campground. The full campground wasn’t yet open, but we scored one of the dozen lakeside sites that are open year-round. From the campground we hiked up along the Thunder Creek Trail and also up onto Thunder Knob. Our last day in the park we tackled the more challenging hike up to the Thornton Lake overlook.

Looking down onto Thornton Lake

That summer we had the chance to enjoy a 30-mile backpacking trip on a loop trail in the southern section of the park. We completed the Rainbow-McAlester Loop over three nights and got to enjoy hiking along a river valley, through alpine meadows, and up and over two high passes. The trails of the North Cascades are steep and challenging, but also very rewarding for the amazing views of the surrounding peaks. We also had the added bonus of foraging for wild berries along the trail!

Surrounded by peaks along the Rainbow-McAlester Loop

My most memorable trip to North Cascades National Park is my first visit, in the fall of 2014. Again, we took advantage of a long weekend and drove along SR20 through to Winthrop, on the east side of the mountains. On the way there we stopped in Rainy Pass to hike the Maple Pass Loop Trail. We learned the truth of the signs that warn of “sudden weather changes” in the mountains. During our hike we had drizzle, pouring rain, thick snowflakes and sunshine! We didn’t end up completing the loop, electing to turn back at the pass due to the heavy snow that was coming down.

Fall colour and snow dusting the peaks in Rainy Pass

Our second hike that weekend took us up the east side of the mountains to explore a beautifulalpine basin filled with larch. For those who are unfamiliar with these unique trees, larch are deciduous conifers. This means that they have needles, like pines or firs, but in the autumn the needles change colour and fall off, like maples or oak trees! They turn a beautiful golden yellow and are a sight to behold amongst the green of the pines and firs of the Cascades.

Golden larch on the east side of the Cascades

​On our way home we stopped to visit one of the most iconic spots along the North Cascades Highway: Liberty Bell Mountain. The highway does a long looping curve in a basin below Liberty Bell and there is an overlook spot as you come into Washington Pass. There is also a wonderful trail up behind Liberty Bell Mountain to Blue Lake, where we were treated to more golden larch forest.

Conclusion
For me, North Cascades National Park is a prime example of using National Park legislation to protect and preserve wilderness. The park is only a piece of a larger complex of National Forest, National Wilderness and National Recreation areas that protect a huge swath of the Cascade mountain range.

The front country areas of the park offer scenic drives and overlooks, lakeside campgrounds, and a variety of hikes for the whole family. But the better part of the park is explored on longer, more strenuous hikes, taking you up into alpine areas and even to the toe of glaciers. To best explore this park, I encourage you to step away from the main road and plan a night out in the backcountry.

This site uses Akismet to reduce spam. Learn how your comment data is processed.

I am an outdoor enthusiast, exploring the wild spaces of Canada and the United States. I am passionate about hiking and backpacking. I have adventured in the Canadian Rocky Mountains, up and down the Cascade Range and into the Sierra Nevada of California.

*Sound on* Hundreds of geese flocking. They create

It’s mushroom season in the PNW. I found this pe

Many hikers of Al’s Habrich trail in Squamish st

I’ve struggled with posting new content for a wh